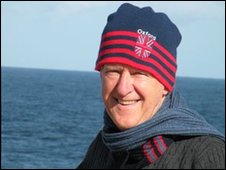 The QE2 made its last ever voyage to Dubai in November 2008.

BBC South Transport Correspondent Paul Clifton says the ship the woman is posing on is the QM2, and the two liners sailed together from Southampton to New York in October 2008.

It was the QE2’s last ever transatlantic round trip between the two cities.

Mr Estevez caught the camera in his nets off the west coast of Europe, so the camera was 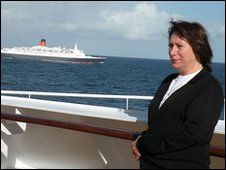 lost in the early days of the crossing.

It may be that the couple are from the US, as one picture shows a man wearing a woolly tourist hat from Oxford.

Cunard, the shipping company that owns the QM2, said no-one had reported a lost camera and the firm had not been able to trace the people in the pictures.